David Suzuki: Aboriginal people are our best bet for protecting the planet, not environmentalists 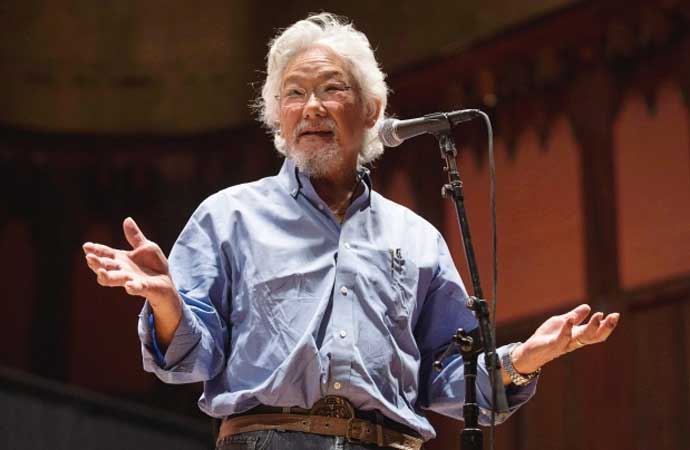 "... Unlike most other animals, humans were creative and used our brains to find ways to exploit our surroundings. We were far less impressive in numbers, size, speed, strength or sensory abilities than many others sharing our territory, but it was our brains that compensated.

Over time, our numbers increased and we moved in search of more and new resources (and probably to check out the Neanderthals with whom we crossbred before they went extinct). When we moved into new territories, we were an alien creature, just like the introduced ones that trouble us today.

George Monbiot of The Guardian makes the point that we can trace the movement of our species by a wave of extinction of the big, slow-moving, dim-witted creatures that we could outwit with even the simplest of implements like clubs, pits, and spears.

Our brains were our great evolutionary advantage, conferring massive memory, curiosity, inventiveness and observational powers. I can't emphasize that enough. Our brains gave us a huge advantage and it did something I think is unique — it created a concept of a future, which meant we realized we could affect that future by our actions in the present. By applying our acquired knowledge and insights, we could deliberately choose a path to avoid danger or trouble, and to exploit opportunities. I believe foresight was a huge evolutionary advantage for our species. And that's what is so tragic today when we have all the amplified foresight of scientists and supercomputers, which have been warning us for decades that we are heading down a dangerous path, but now we allow politics and economics to override this predictive power.

No doubt after we evolved, we quickly eliminated or reduced the numbers of animals and plants for which we found uses. We had no instinctive behavioral traits to restrict or guide our actions — we learned by the consequences of what we did. And all the mistakes that we made and successes that we celebrated were important lessons in the body of accumulating knowledge of a people in a territory. That was very powerful and critical to understanding our evolutionary success — it was painstakingly acquired experience that became a part of the culture. We are an invasive species all around the world, and I find it amazing that our brains enabled us to move into vastly different ecosystems ranging from steaming jungles to deserts, mountains to arctic tundra, and to flourish on the basis of the painful accumulation of knowledge through trial and error, mistakes, etc.

So it was the people who stayed in place as others moved on, who had to learn to live within their means, or they died. That is what I believe is the basis of indigenous knowledge that has built up over millennia and that will never be duplicated by science because it is acquired from a profoundly different basis (I wrote about the differences in a book, Wisdom of the Elders). The wave of exploration hundreds of years ago brought a very different world view to new lands — North and South America, Africa, Australia — based on a search for opportunity, resources, wealth. There was no respect for flora and fauna except as potential for riches, and certainly no respect for the indigenous people and their cultures. Of course, by outlawing language and culture of indigenous peoples, dominant colonizers attempt to stamp out the cultures which are such impediments to exploitation of the land. Tom King's book, The Inconvenient Indian, argues very persuasively that policies are to “get those Indians off the land”.

I think of my grandparents as part of the wave of exploration of the past centuries. They arrived in Canada from Japan between 1902 and 1904. When they came on a harrowing steamship trip, there were no telephones to Japan, no TV, radio, cellphones or computers. They never learned English. They came on a one-way trip to Canada for the promise of opportunity. Their children, my parents, grew up like all the other Japanese-Canadian kids at that time, with no grandparents and no elders. In other words, they had no roots in Japan or Canada. To them, land was opportunity. Work hard, fish, log, farm, mine, use the land to make money. And I believe that is the dominant ethic today and totally at odds with indigenous perspectives.

Remember when battles were fought over drilling in Hecate Strait, supertankers down the coast from Alaska, the dam at Site C, drilling for oil in ANWR, the dam to be built at Altamire in Brazil? I was involved in small and big ways in these battles, which we thought we won 30 to 35 years ago. But as you know, they are back on the agenda today. So our victories were illusions because we didn't change the perspective through which we saw the issues.

That's what I say environmentalists have failed to do, to use the battles to get people to change their perspectives, and that's why I have chosen to work with First Nations because in most cases, they are fighting through the value lenses of their culture.

The challenge is to gain a perspective on our place in nature. That's why I have made one last push to get a ball rolling on the initiative to enshrine the right to a healthy environment in our constitution. It's a big goal, but in discussing the very idea, we have to ask, what do we mean by a healthy environment. We immediately come to the realization that the most important factor that every human being needs to live and flourish is a breath of air, a drink of water, food and the energy from photosynthesis. Without those elements, we die.

So our healthy future depends on protecting those fundamental needs, which amazingly enough, are cleansed, replenished and created by the web of life itself. So long as we continue to let the economy and political priorities shape the discussion, we will fail in our efforts to find a sustainable future. I have been trying to tell business folk and politicians that, in the battle over the Northern Gateway, what First Nations are trying to tell us is that their opposition is because there are things more important than money."

HolisticNursingCE.com provides the knowledge, tools and strategies you need to be the change you want to see.

Learn from nurses who are making thoughtful, caring, evidence-based change to improve their lives and the lives of their patients, co-workers, and vulnerable populations around the world.